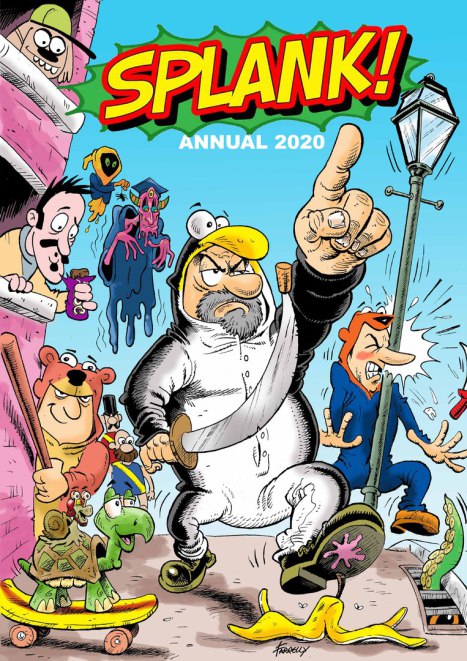 The Splank! Annual was made available as a free download during the 2020 lockdown.

Designed to evoke memories of Christmas presents past, it mixed madcap humour with adventure strips and one, very special, text story.

Featuring the cream of the UK small press scene, coming together with leading professionals from comics like, Beano and 2000 AD its aim was to raise funds for 'NHS Together' and to promote the work of creators who had seen their income badly hit by the cancellation of Comic Cons across the country.

We had more than a thousand downloads, many of them from an Indonesian site that published links to pirated comics.  So Splank! may well be one of the first free comics to have been pirated.

Now working on producing a very limited hardback edition of the annual.  Watch this space.

NHS Together is a charity that supports NHS staff, it was the charity that Sir Tom Moore supported with his efforts.  Splank! didn't do just so well, but we did raise over £600.

Thank you to all who contributed.

What They Said About Splank!

“SPLANK annual 2020 is a veritable cornucopia of comic strip goodness”.

Steve MacManus, former Editor 2000 AD, Author, “The Mighty One” and “The Sheerglam Conspiracy”.

“The new Splank! anthology is a terrific idea and I’m delighted to be part of it. The compendium is a cornucopia of delights – humour, adventure, science-fiction… What’s not to love? And all in the cause of promoting comic creators and their work, just when they need it. Grab Splank! now... before it grabs you!”.

Splank! is an ingenious combination of work from professional artists, small-press publishers and newcomers with a mix of humorous and adventure strips some set in a surreal world. 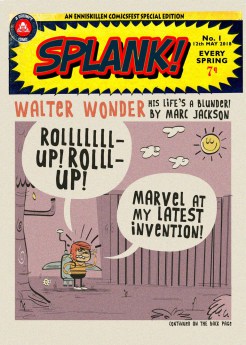 Some copies of the original Splank! are still available.  Please note all material in these comics is included in the digital download of Splank! Annual 2020.

The first issue of Splank! was launched at the Enniskillen Comics Fest on 12th May 2018 as a magazine-sized, 44 page collection of comic strips in the tradition of the British Comics of old.  Mixing mad-cap humour with stories of pirates, chimney sweeps fighting the forces of darkness and some almost true tales of the comics of old.

Issue one features a cover story by Marc Jackson, along with strips by current Dennis the Menace artist, Nigel Parkinson and British comics legend Mike Higgs.

Freelance cartoonist Dave Windett, who has worked on a host of UK comics including  Beano, Dandy, the DFC and a host of TV Licensed comics, has contributed a beautifully drawn tale of Spookytown and former Oink artist, Belfast's own Davy Francis has illustrated the story of Belfast's most usless bad guy, The Grumpy Penguin.

Mal Coney and Alan Nolan bring their unique styles to the pages of Splank! along with a charming story by Cat Byrne and a strip by the superb John Robbins.

Adventure stories are supplied by local writers Glenn Matchett and Colin Sinclair, with art by Scott Twells and Morgan Brinksman, artists who could not have more different styles but both of whom really know how to tell a story.

I'm personally delighted to be able to present five pages the superb Beans and Tucker by the ultra talented John Farrelly and a preview of the Cthulhu Kids comic by me (Peter Duncan) and Galaxafreaks writer and artist Andrew Pawley which has just been released.

Due to Coronovirus there may be some delays in postage.  We are limiting visits to the Post Office to once a week.

You can order your copy now for £7.00 (UK), postage paid via Paypal to Splank@Boxofrainmag.co.uk 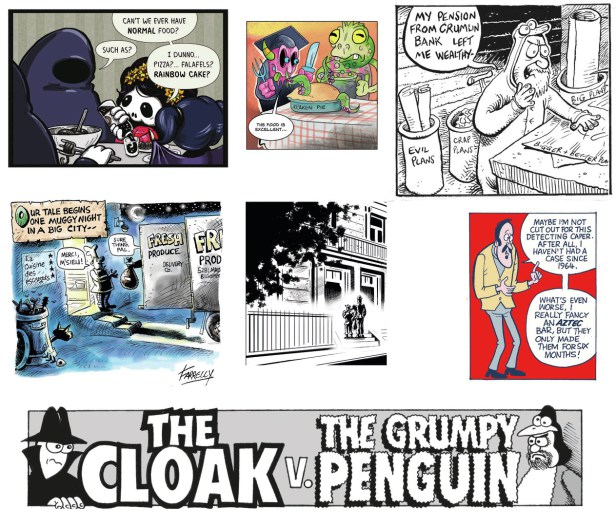 Anyone interested in contributing to future issues of Splank! contact me on Splank@boxofrainmag.co.uk and check out the Submission guidelines for Splank! here.

*to be strictly accurate, Mike Higgs designed Grumpy Penguin in two panels of a strip,  included in Splank! 1, but all the rest was Duncan.

The Secret Origin of Splank!:  From April 1st 2016, an article detailing the creation of the original Splank! Comic in 1967.

Splank! & The Grumpy Penguin: The Origin of the Grumpy Penguin, Splank's own! super-badguy.  Includes a link to the film, ''Peter: A Documentary' where I make a total idiot of myself, and some ramblings about American Whiskey.

Before Faceache:  A look at Ken Reid's work for Power Comics, the comics which inspired Splank!  Part One, Part Two.

There are no entries yet.