A selection of cover artwork from Sector 13

Part One - The First Issue 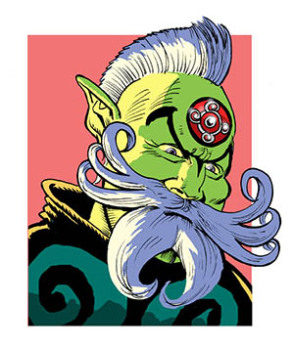 Sector 13, the Fanzine, started as an idle conversation on a Facebook Messenger Page. Members of Belfast-based, 2000 AD fan group, “Sector House 13: The Pit”, were discussing what they should do to mark the 40th anniversary of the galaxy’s greatest comic. Enniskillen Comics Fest was leading the way in Northern Ireland, with an excellent event with an impressive list of 2000 AD related guests and we wanted to play our part.

I think it was me who suggested a fanzine, but I had something very different from what we eventually produced in mind. A few articles, reviews and maybe some artwork, but Laurence McKenna, instantly picked up the idea and ran with it. Laurence wanted to go the whole hog and produce a high-quality, tribute comic. He contacted Rebellion and we got the go-ahead to produce our own zine. There were provisos. We had to be non-profit and nobody, bar the printer, could be paid for working on our zine. We had to be a true non-profit, fanzine and we’ve stuck to that very carefully ever since.

The idea quickly developed into an excuse for a small group of fans to meet in the, Parlour Bar in Belfast, once a week, to plan what we were going to do. To say we were disorganised would be something of an understatement, there were no set roles, no deadlines that anyone paid any attention to, but there was a huge amount of good will and excitement and decisions were made by reaching a general consensus.

The zine name was obvious. ‘Sector 13’, taken from the fan-group's title had a real ring to it, and, with a little help from Ryan Brown, we soon had a logo. We decided on our fictional ‘editor,’ Fitztharg, The Mighty One’s Irish cousin and I approached, Newry-based cartoonist, John Farrelly, for an illustration.

We wanted to do something different from the other 2000 AD fanzine we all knew, Zarjaz. Not because we were not fans, I’d been buying and reading it for a few years by then, but because there seemed no point to do a copy of their style. They published at A5 size, we decided on A4. Their pages were all black and white, we decided to do colour strips as well.

One of our intentions was to involve as many members of the fan group as possible, and the idea of a Photo-Story, featuring the cosplayers in the group was born. This was Laurence’s baby from the beginning, and it starred the streets of Belfast as, Sector 13, the roughest, toughest, meanest section of Mega-City-One and our cosplayer friends as the Judges who patrolled those streets.

To go with the photo-story, Andy Luke, an experienced writer, and comics creator, supplied a poem and we had two strips credited to W D McQuaid, the pen name of, Mark McCann, who would later write, “Spiritual Awakening” for prog 2149. Art for Mark’s strips were provided by David Yeh, Duncan Vaughan, Paul Malone and Jason Stewart with Pin-ups from Richard Harrison and John Farrelly.

I had written a story for the first issue and we were hoping it would be ready right up until the last moment. But in the end, there were still pages being worked on and it had to be dropped, but I did get to write the editorial under the guise of Fitztharg. We ended up with 24 pages, a couple of which were, I am afraid, little more than filler. Really, who needed an autograph page. But we were excited with what material we had.

Our cover featured a photograph of cosplayer, Simon McKnight, in the guise of Judge Knight, adjusted, with considerable skill, by, artist, Ryan Brown. A couple of members of the group were very insistent that we needed a ‘graphic designer’ to put the issue together. Mainly, I suspect, because of projects they had been involved with before that had not gone well.

The work of preparing the cover, the editorial pages and getting the issue ready for the printer was carried out by a friend of one of the team who had the necessary skills and access to the software required. There was a flurry of activity the weekend before Enniskillen Comics Fest, with pages going backwards and forwards between us and decisions on where particular items would appear being made.

We had been pointed towards a copy shop in the centre of Belfast as people who were easy to deal with and had produced short runs of comics before. Laurence and I funded the printing of the first issue, and our printers did a great job, printing on heavy, thick paper. But not before we had a few issues with page sizes and bleeds being missing. In the end they saved our bacon by correcting the mistakes on the files sent to them and having the 150 copies we wanted ready for our regular Thursday evening meeting, the day before Enniskillen Comics Fest.

I remember opening one of the boxes in the Parlour that night with Laurence and Ryan. We were thrilled. Sector 13 issue one looked fantastic, Mark’s stories were superb and Laurence had done a fine job, including as many of the group cosplayers as he could, in a photo-story that had real bite and a special relevance to our group. I was disappointed that my story had not made it, but overall was really proud of what we had achieved.

The next day we travelled down to Enniskillen for an excellent Friday night event with a whole host of 2000 AD creators. The next day, at the festival, taking place in the magnificent setting of, Enniskillen Castle Museum, Laurence and I took control of our first convention table. It went well, we sold very well, eventually, all but, selling out of the first print.

And then someone pointed out, our cover blurb.